The Slip Check team regularly conducts slip tests in the South Coast of NSW such as Wollongong and surrounding areas such as Kiama, Shellharbour, Nowra, Mittagong, Shellharbour and Moss Vale.

Some examples of slip testing work that we have conducted include property audits at shopping centres. In many instances, the slip and fall incidents are related more to people stepping on things, rather than actually slipping. However good accident and incident forms are required to determine whether the floor was the fault or there was some other underlying factor.

These other factors can also be identified through what’s commonly called a “measles map” where red dots are placed over the map of a shopping centre. This identifies where the high risk areas are for slips and falls. Non-slip treatments and the like can then be implemented to reduce the risk before a letter from a Wollongong slip and fall lawyer.

Slip test certificates to AS 4663 by a NATA accredited testing facility are required to prove that the floor meets the slip resistance requirements of Standards Australia / CSIRO publication HB 197. This publication is used as best practice to prove that the floor is non-slip. Generally best practice is for quarterly slip testing at south coast shopping centres. This helps to identify if surface shave changes in slip resistance properties over the course of time. This is particularly true when a floor polish or floor sealant has been resurfaced where testing is best conducted immediately before and after the strip and seal. This is so that the risk of a slip and fall can be assessed at the beginning and end of the floor lifecycle.

If there is a change of floor polish or sealer brand or specific product the slip resistance property should be assessed. Other factors that may affect the results of a slip test include changes of the way in which the floor is finished, such as the polishing or burnishing pads. Rougher pads may assist to increase the slip resistance. Slip Check has observed in situ and tested where the pad may change the slip resistance, sometimes significantly.

So if the floor polish or sealer may initially be slippery, then we can assess how a change in the process can improve the slip resistance and reduce the risk of a slip and fall. This is also where non-slip treatments can be assessed. Not just initially, but the long term suitability of the non-slip treatment. Wollongong cleaning companies can benefit by undertaking slip resistance testing  which is a common requirement as part of the cleaning companies contractual arrangement.

Other ways to understand the risk of slip and falls is to have a quality control chart showing the slip resistance for the floor throughout and to show how stable it is. This is quite useful when there may be a claim some years earlier and the non-slip properties of the surface will be determined by a slip test some years later. The slip resistance will generally change over time, and in fact will almost always fall. So if there were reports years earlier we could generally show that it was more slip resistant, which can only be in your favour than the position that you would otherwise be.

Building and construction sites are tested by us and include slip tests being conducted at the University of Wollongong. The purpose of testing at a construction site is to ensure that the floors meet the requirements of the Building Code of Australia and disability access standards. This can assist Wollongong construction companies, building owners and facility managers in a legal dispute in a slip and fall matter down the track if lawyers are involved. It helps to set out that the floor complied with the relevant building codes and Australian Standards.

Ongoing testing will help to identify when surfaces are reducing in slip resistance to a level where intervention is required through the use of non-slip treatments and the like. We have assisted many property owners in the South Coast of NSW such as Wollongong, Kiama, Shellharbour,  Moss Vale  & Nowra, to understand their risk in slip, trips and falls.

Please contact Slip Check for more information on how we may be able to assist. 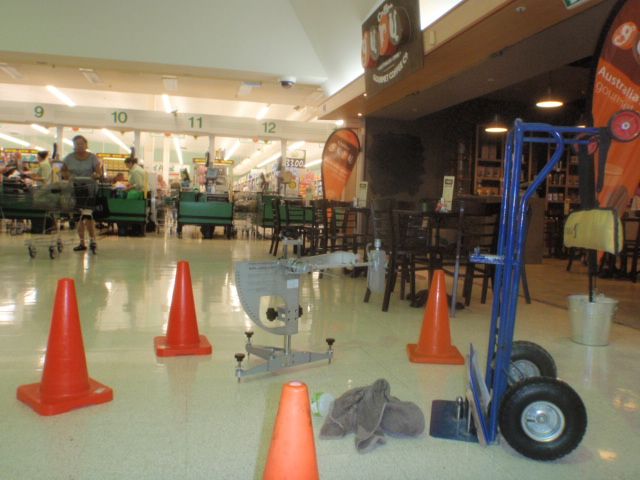