Does a Reported P3 equal an X Pendulum Slip Test?

The changes made are essentially the way in which the test foot is prepared, which now uses an additional polishing of the rubber slider with a pink lapping film. This polishes the surface smoother than the 400 grade paper that has traditionally been used. Consequentially, lower slip test results are invariable for some surfaces. The likely candidates of those floor surfaces that may change significant in the reported frictional characteristics include honed stone surfaces and surfaces treated with a ‘non-slip’ acid treatment.

Previous most internal wet floor surfaces were required to achieve an X pendulum classification. The ‘equivalent’ of the X classification is now P3. So if you now have a new slip test report conducted to the 2013 version of AS 4586 and it achieves a P3, it is the minimum recommendation for an internal wet surface that does not have a significant gradient.

While you may be able to classify a new report in reference to the old HB 197, the reverse may not be quite so easy. There is a likelihood that a significant change may result in the reported British Pendulum Number (BPN) or what is now called the Slip Resistance Value (SRV). So P3 is equivalent to an X; but an X rating is not equivalent to a P3 pendulum Classification.

Best practice would be to have the surface re-tested to the 2013 version of AS 4586 Slip resistance classification of pedestrian surface materials. Other factors to consider are what the contractual arrangements are in regards to the supply of materials such as tile and stone. In many instances the design may be related to the previous standard and it would not be fair, for use of the term, to comply with recent changes that occurred when a shipment of tiles is on its way from Italy or Spain.

Floor slip testing companies are obliged to test to the current slip resistance standards, albeit some time to change over from a quality assurance perspective. However now, some 6 months later, all slip testing companies should be testing to AS 4586-2013. This is an expectation by the National Association of Testing Authorities (NATA). So if you project relates to a pre 2013 specification, some consultation is required by all parties to make it clear. Also, when engaging a slip testing company, specify whether you require the 2013 or 2004 version of AS4586, otherwise the default slip test will be conducted to the 2013 version.

If you require assistance with slip resistance testing and consulting, please call one of our Floor Slip Testers in Sydney or Melbourne. 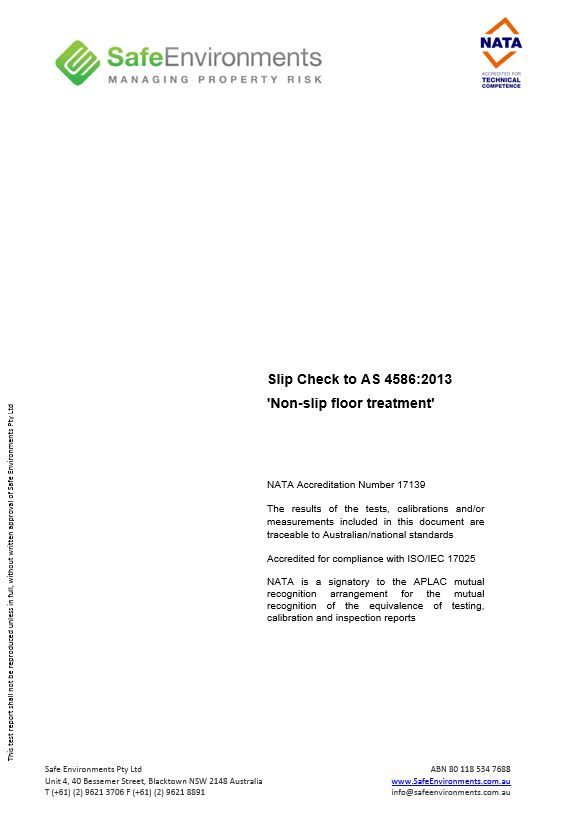