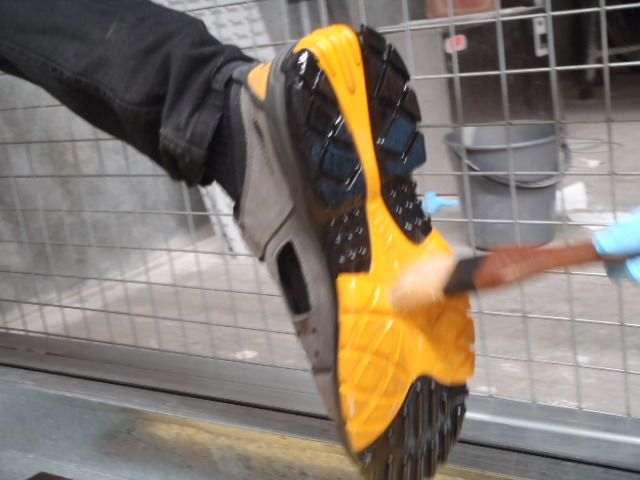 One aspect of the Australian test methods that requires immediate attention is the inclining oil wet ramp test method that provides the R ratings. While the oil wet inclining platform test is generally considered to be the international gold standard within industry for testing the slip resistance of stone and tiles its relevance appears to be reducing domestically. Stone, in particular is more suited to other slip resistance test methods, as stone is not generally specified in industrial sites that are prone to oil contamination.

Having first conducted ramp testing at CSIRO in the early 2000’s, I have been involved in determining the difference between the Bottrop shoes and the Lupos Picasso shoes when the Bottrop boots became unavailable. Much of this research helped to validate that the difference between these tests were negligible, however since the introduction of the Uvex bots, to my knowledge there hasn’t been any in depth study that has been published to highlight the likely difference.

Possible Changes to the R Rating Shoes and Boards

It seems sensible that Australian Standards align with the 2013 version of the DIN standard, to once align ourselves internationally to ensure that there is harmonisation to facilities trade opportunities, both through importing products and, perhaps more importantly in the export market for stone quarries. This may take a number of months for any realignment to occur, depending on internal procedures any required stakeholder consultation at the Australian Standards level. Standards Australia Committee BD-094 have formed a working group which are in the process of assessing the current shoe and calibration board combinations.

When assessing international slip resistance test reports that have the R slip ratings, there are a few items to first look at:

Please contact our Sydney or Melbourne office if you have international slip resistance test reports that you may need assistance with in determining whether they may be suitable for your current construction project.

Any changes should also reduce variability that may occur between accredited testing laboratories by allowing only one shoe and calibration board combination. This will also facilitate a more rigorous external proficiency testing to reflect a more accurate picture of the true uncertainty inherent with the test method and greater confidence on international test reports.

If you have any queries about the R rating slip resistance test methods, please contact our office in Sydney or Melbourne, or please leave a comment below so that we can assist you further.