I recently attended a site where a balcony had been specified with a class X or P3 material which is a common incorrect specification for an external, albeit undercover, pedestrian surface.

This is not the first time I have come across this incorrect specification. Undercover external surfaces, such as balconies, verandas, patios, etc should have a specification of W or P4 if not higher and it is not to be considered a reduced risk of contamination due to the covering over the external surface and hence should not be specified with a lower classification as a result.

Previously Standards Australia Handbook 197 Table 3 is where specifiers could find guidance on specifying slip resistance for specific surface areas. However this table does not specifically make mention of surfaces such as balconies, verandas, patios etc in its list of recommendations for specific locations.

Most commonly this mis-specification arises from the specifier assuming that because the surface is undercover that a reduced level of slip resistance is suitable. However due to factors such as wind driven rain and people traipsing water across the surface on wet days the surface is still anticipated to become significantly wet.

In the absence of specific guidance from the handbook it is best practise to select the most similar surface listed and then base a specification on this recommendation.

In some cases I have heard that specifiers have mistakenly likened these areas to that of an undercover concourse area of a sports stadium which list class X or P3 as the recommended level of slip resistance for this type of surface.

The more correct similar surface area to base the specification on would be an external colonnade, walkway or pedestrian crossings which has a class W listed as the recommendation for these types of surfaces.

With the release of Standards Australia Handbook 198 Guide to the specification and testing of slip resistance of pedestrian surfaces in June of 2014 this commonly mistaken and incorrect interpretation & specification will hopefully become a less common occurrence. HB 198 has a more detailed listing in Table 3B for external covered surfaces, it states; “… external colonnades, walkways, pedestrian crossings, balconies, verandas, carports…” and lists a P4 classification as the advised level of slip resistance for such surfaces which correctly equates this type of surface to that of an external walkway 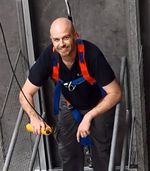 Martin holds a Bachelor of Science in Applied Chemistry from the University of Technology Sydney and a  Masters in Laboratory Quality Analysis and Management, Macquarie University.

Specialising in the measurement of health and safety testing to Australian Standards, Martin has developed skills in access and egress and hazardous materials. Martin is responsible for the accreditation of Safe Environments Laboratory to ISO 17025 - Testing and Calibrations and is signatory to the Mechanical Testing Facilities.