Safe Environments were recently engaged to undertake luminance contrast testing of a stairway at a railway station south of Sydney. The purpose of the luminance contrast testing was to ensure compliance with the Building Code of Australia (BCA) and disability access requirements for transport facilities. In this case study the surface that was required to be tested included:

The TGSIs used were integrated paver types which requires a 30 % luminance contrast ratio, in which the purpose of the TGSI before the stairway is to warn visually impaired people that they are approaching a hazard ahead.

Integrated TGSIs are generally recommended by Safe Environments as the contrast ratio required is less than discrete TGSIs being 45 % and even higher requirements for composite discrete TGSIs, being 60 %.

Not only do TGSIs and luminance contrast assist blind and visually impaired persons, but also people who have perfect vision. Stairs are notorious in having an increased risk of falls. Many falls on stairs are attributed to miss-steps, rather than slipping which many people initially considered to be the principle cause. However by providing contrasting luminance reflectance values, this provides a clear delineating between the step edges. The easier it is to see the edge then the less likely that this may be a significant contributing factor in a fall on stairs.

The onsite luminance contrast testing was undertaken by Forensic Scientist Mr Ryan Voorderhake, using a Minolta Chroma Meter CS-100A. The results indicated that the bare concrete against the dark charcoal tiles and inlays provide adequate luminance contrast. In many situations however, there can be inadequate contrast when concrete is wetted and becomes a darker colour.

The luminance reflectance results are then calculated through the Bowman-Sapolinski equation to then determine the luminance contrast, in assessing compliance with the building codes and disability access wayfinding requirements.

If you require luminance contrast testing and/or slip testing in Sydney or Melbourne please contact our team of scientists to provide reflectance values and slip ratings that you can rely on. 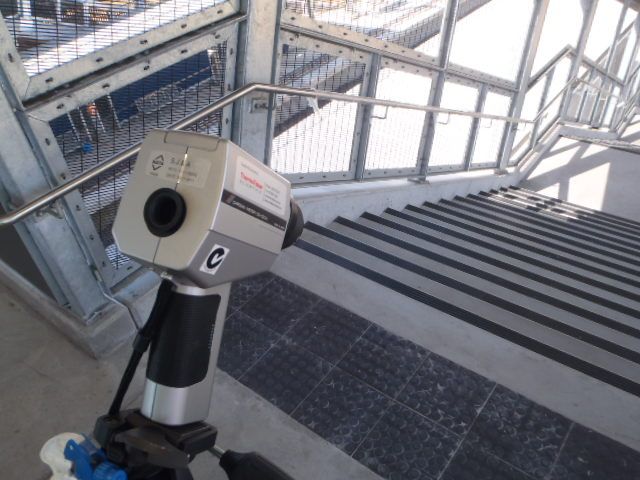